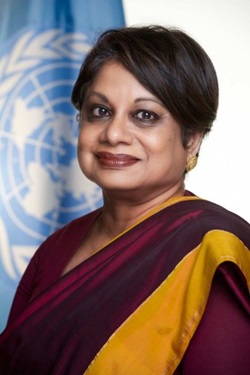 “There is a significant gap between language inscribed in our Security Resolutions, our declarations, our action plans, and the actual reality of women’s participation in decision-making when it comes to peace and security issues.”

The lead author of the Global Study was prominent expert, Ms. Radhika Coomaraswamy (Sri Lanka). Professor Coomaraswamy is the former UN Secretary-General’s Special Representative for Children and Armed Conflict. Before that, she was the Special Rapporteur on Violence against Women. She began her career as a constitutional lawyer and has written two books on the constitutional process in her native Sri Lanka and on the role of the Judiciary in plural societies.

She was also Chairperson of the Sri Lankan Human Rights Commission from 2003-2006. Since the 1980s, she has been a strong voice for women's international human rights and has written extensively on the subject while serving as the Special Rapporteur on Violence against Women. Her annual reports covered thematic issues, and her country visits - to look at comfort women in Japan, women trafficked in Nepal and Poland, women victims of domestic violence and rape in Brazil and South Africa and women in US prisons - explored the actual impact of international norms in specific contexts.

As the Special Representative on Children and Armed Conflict, she was in charge of preparing the annual report of the Secretary-General on Children and Armed Conflict. As a result she developed an expertise on the protection of civilians, especially children in the context of armed conflict. She has also visited conflict areas throughout the world from Afghanistan, Democratic Republic of Congo, Somalia, Burundi, Cote d'Ivoire, Myanmar, Israel and Palestine and Southern Thailand, advocating for the rights of children and meeting with state and non-state actors to protect children from grave violations. She received her BA from Yale, her JD from Columbia, and her LLM from Harvard.